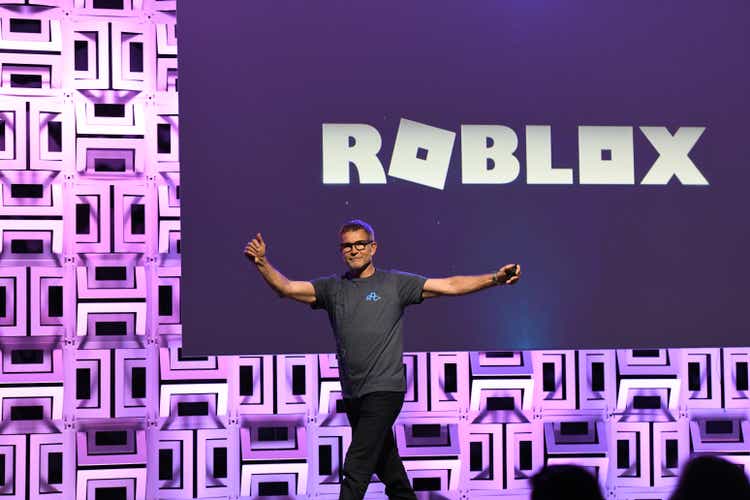 Roblox (NYSE:RBLX) is a popular online gaming company that was founded in 2006 and increased massively in popularity during the “lockdown” of 2020. As people were stuck at home, many craved social interaction and Roblox provided just what people needed. There has been a lot of talk of the “metaverse” a virtual world where people interact as virtual avatars. The technology has been criticized as “too early”, but Roblox has already a Metaverse-style experience, while Meta Platforms (META), formerly known as Facebook, is playing catch up. The Metaverse industry was valued at $22.79 billion in 2021 and is forecast to grow at an outstanding 39.8% compounded annual growth rate [CAGR], up until 2030. In this post I’m going to break down its business model, financials, and valuation, let’s dive in.

The mission of Roblox is to build a “human co-experience” platform that enables “billions” of users to “play, learn, communicate, explore and expand their friendships”. I like to say the platform characters look a little like “Legoland” figurines, but I’m sure Roblox’s lawyers would dispute this.

The platform is a social game like any other massive multiplayer online [MMO] game. Each player has a custom avatar and can interact with others. A particular differentiator and a trend that is more “metaverse”, is the running of virtual events. For example, in 2020 popular rapper “Lil Nas” performed a concert inside the Roblox game. Rock band 21 pilots has also performed a concert inside the game and even Elon John. Its Chainsmokers virtual concert reported ~16 million visits, which is astonishing. This is a major deal as it means, the platform can sell tickets and even merchandise related to the event. For example, during the Elon John event, a series of special costumes and jumpsuits were sold virtually. Critics would argue this isn’t “real” and of course, it is not the same as being at a live concert physically. However, given the ease of access, one cannot doubt that it is still a unique social experience, which can be done with friends.

The currency used inside Roblox is called “Robux” and is used by players to purchase avatar costumes and other items. This is a major source of revenue and the platform has a vast community of millions of developers who build experiences inside the platform.

The platform has ~12.9 million monthly unique players and is regarded as one of the world’s most popular online gaming platforms. For comparison, I tried to find data on the popular “World of Warcraft”. One estimate said the platform has 8 million monthly active players, which seems a little on the low side, as it is actually less than Roblox! However, another source indicates World of Warcraft is number one for “total players” with 124 million. relative to Roblox at “29 million” total players. It is safe to say these numbers are not very accurate, but at least it gives us an idea of scale. Either way, Roblox is an immensely popular game, but it has often been criticized as being “just for kids”.

Roblox has found its niche in the market for younger players, but this is not necessarily a bad thing. For example, the rapidly growing social media platform TikTok also started with kids, before moving to teenagers and then adults. I like to say these platforms “grow with the customer”, and we have seen a similar pattern with Roblox, albeit on a smaller scale.

According to demographic data by Roblox, the platform has 58.8 million daily active users, with 31.9 million or 54% of these being over the age of 13. This is an increase from the 50% over 13-year-olds reported in the same quarter last year. I personally would like to see a more detailed breakdown, perhaps those players over 16 and 18, but at least it’s progress. On the Q3, earnings call management did state that the 17 to 24-year-old is its “fastest-growing” cohort increasing by 41% year-on-year, but they didn’t elaborate on exact numbers. Older players are more valuable for a few reasons. Firstly advertisers will be willing to pay higher rates. Secondly, older players are likely to be more consistent and less prone to fads. We all remember Pokemon cards and Yoyos.

Robot reported mixed financial results for the third quarter of 2022. Revenue was $517.7 million, which increased by just 2% year over year. This is a far cry from the 30% growth rate in the last quarter and over 100% growth rate in mid-2021. Management elaborated on the reason for this slowing growth. Roblox reports GAAP revenue which is “deferred” over the lifetime of its players, which has increased from 25 to 28 months, which is a positive. Without this increase in player lifetime, revenue would have been $111 million greater or $628 million. This would represent an increase of 23% year over year, which is much better but still slightly lower than prior years.

Roblox makes a large portion of its revenue from in-game display advertisements and sponsorships with companies such as Disney and Lego. Given the advertising market is going through a cyclical downturn currently, this also impacts revenue. Another key metric Roblox reports is called “Bookings”, which refers to revenue plus the change in deferred revenue. Generally, this metric calculates the amount of virtual currency called “Robux” purchased by players on the platform. For example, a user may convert $50 USD to 50 Robux$, but not spend it right away. The company believes this metric is a better measurement of business progress than Non-GAAP revenue. In this case, the company reported $701 million in bookings, which increased by 10% year over year or 15% on a currency-adjusted basis. Relative to the prior 2 quarters, this was an improvement but still down from the peak of $770.1 million in Q4,2021.

Daily Active Users [DAU] are arguably the most important metric regarding overall platform health. In this case, the company reported DAUs of 58.8 million which increased by a solid 24% year over year. This growth rate was an improvement over the last quarter (21%), but its user growth is starting to slow down. A positive is on an absolute basis its number of daily active users is a record high, up 62% over a two-year period. This is really positive news given we are currently going through a cyclical downturn in the gaming market, as I reported in my analysis of Microsoft, with the Xbox.

Breaking Daily Active Users [DAUs] down by region. The company is well diversified across various parts of the world, which is a positive. Its largest market is surprisingly Europe, with 15.5 million DAU or 26% of the total. Europe is also a rapidly growing market with 30% year-over-year growth. The U.S & Canada reported 14.2 million or 24% of the total, and increased by a solid 17% year over year. This is a positive sign as the North American market is often the most prized by advertisers. The Asia Pacific region, reported 13.2 million DAU or 22% of the total. This was the fastest-growing region with 40% year-over-year growth. Regions such as South East Asia, are commonly known for “gaming addiction” and are extremely strong markets for engagement. It should be noted that the platform is banned in China, but I’m guessing some users may still be using the platform via a proxy. Roblox also reported solid DAUs in the Rest of the World with 15.9 million reported.

Moving onto profitability, Roblox reported earnings per share of negative $0.50, which missed analyst estimates by $0.16. In addition, the losses widened from the negative $0.13 reported in the same quarter last year. Adjusted EBITDA also showed a similar trend with just $50.9 million reported, down from $135.7 million in the prior year.

The decline in profitability looks to have been driven by a sharp rise in expenses. For instance, its Developer exchange fees increased by 17% year over year to $151.3 million. The positive is I don’t deem this to be a bad sign, as if Roblox is paying developers more, they must be building more great parts of the platform which are engaging users.

Roblox has also been investing heavily in its “infrastructure” and Trust & Safety features. These costs increased by a staggering 53% year over year to $126.3 million. Again, I wouldn’t necessarily say this is a bad thing. As given approximately half of its users are still under the age of 13, trust & safety must be a top priority.

Another major expense is Personnel costs, with Stock-based compensation. This increased by 56% year over year to $160.3 million. As someone who used to work for many large tech companies, I understand that stock-based compensation is important for attracting and retaining the best talent. However, I believe companies should have a plan for positive earnings long term and do share buybacks to compensate investors for dilution.

Roblox has a solid balance sheet with $3 billion in cash and short-term investments. The company does have total debt of ~$1.48 billion, but the vast majority of this $988.7 million is long term debt, thus manageable.

In order to value Roblox, I have plugged the latest financials into my advanced valuation model which uses the discounted cash flow model. I have forecasted 20% revenue growth for next year. This is based upon an adjustment of revenue to the greater lifetime of each customer. In addition, this estimate takes into account economic headwinds. In years 2 to 5, I have forecasted a faster revenue growth rate of 30% per year. I expect this to be driven by advertising spending increasing on the platform.

To increase the accuracy of the valuation, I have capitalized R&D expenses which has lifted net income. In addition, I have also forecasted a pre-tax operating margin of 25% in 8 years. This is slightly above the 23% average for the software industry and I expect this to be driven by the “Robux” currency and in-game sales.

Roblox has managed to grow its demographic in the right direction, but still approximately 46% of its users are under 13. Although there are some positives to this, such as developing a brand share of mind early, there is also the danger of users getting bored with the platform easily. It is also harder to capture value from users below the age of 13, as they do not have their own credit cards and must ask their parents for payments. The management of Roblox is bullish on its older demographic and insists its platform is for all ages, so only time will tell if it will continue to age well.

Roblox is one of the world’s most popular multi-player online games right now and has all the ingredients to spearhead the growing “Metaverse”. Its platform has continued to grow its daily active users and bookings at a solid rate, despite headwinds for other gaming companies. I believe virtual events and concerts could have huge potential. It is a great way to create special moments and ensure users signup and join. The stock of Roblox is undervalued intrinsically and relative to historic multiples and thus it could be a great long term investment.