Which Stocks Will Benefit From The Metaverse?

Since I last covered the world of metaverse stocks, several developments have occurred, including acquisitions, earnings, changes in the macroeconomic environment, and more. There has also been a ton of stock price movements that warrant updating. But first, let’s start with the basics. What is the metaverse, and what does it mean for investors?

The metaverse means different things for different applications. The word itself “metaverse” is a broad term. Some have called it “the future of the internet.” The metaverse is an immersive platform in the gaming world where players can interact with other players and the digital world around them. Roblox (RBLX) is perhaps the most recognizable example.

For businesses, the metaverse can be used to conduct meetings, walkthroughs, presentations, and other collaborative activities in the virtual world. Microsoft Mesh for Teams is a terrific example of what tech companies envision for the future of meetings.

The metaverse is often accessed through virtual reality (VR) or augmented reality (AR) headsets, but it can also be accessed through gaming consoles and your cell phone. CNET has a terrific explanatory article that can be found here.

Many companies can benefit significantly from the technology, which is why they are clamoring to monetize it. Companies like Meta (FB) believe that the metaverse is the company’s future. So much so that it abandoned the Facebook name. Other companies, like NVIDIA (NVDA), stand to benefit differently, as it will provide the “plumbing” on which metaverses are built. Let’s take a look at some of the recent developments of the stocks to watch.

Which Are The Best Metaverse Stocks To Watch?

Meta, formerly Facebook, has had a difficult go lately. First, the whistleblower hurt the company’s already shaky reputation with testimony before congress. Then Apple (AAPL) changed iOS, asking users if they would like to opt out of applications tracking them. This causes a serious problem for Meta’s advertising business. Most people are thought to have opted out, which leaves advertisers in the dark about ad effectiveness. This causes them to spend less with the platform. Next came Q4 earnings.

Fiscal 2021 revenue was strong. At $118 billion, it increased 37% over 2020. Similarly, operating income was impressive at $46.8 billion on a 40% operating margin. The fourth quarter was less impressive, however, and guidance was tepid. Q4 2021 sales were 20% better than Q4 2020 while operating income actually dropped YOY on increased costs.

Daily active users (DAU) missed estimates. Meta also released guidance of $27 billion to $29 billion in revenue for Q1 2022, falling short of analysts’ expected guidance of just over $30 billion. The stock cratered as a result, as shown below.

Directly relating to the metaverse, Meta reported that its Reality Labs segment lost $10.2 billion from operations in 2021. This is not unexpected; however, it appears to have sparked alarm in the market.

The company is fundamentally strong in many ways; however, it has some major headaches to rectify.

First, Meta needs to rehab its image with consumers and regulators. A recent study released by CNN showed that 76% of respondents believed Facebook makes society worse, while just 11% thought it made society better. This is an ominous sign for the company’s future. In this same study, 53% of respondents believe that the government should increase its regulations on Facebook. There is also growing concern over the effects of social media on young people.

Facebook didn’t make many friends during the last couple of election cycles either. The company walks a very fine line between what some believe is censorship or promotion of one side and what others decry as misinformation and conspiracy theories. The same can be said of the platform in dealing with COVID-19 content and other global issues.

Congress is considering a slew of regulations on Meta and other Big Tech companies. One such route would be creating a new agency dedicated to the oversight of Big Tech, although it is doubtful this comes to fruition anytime soon, in my opinion.

Other routes would include much stricter privacy laws that would empower consumers and potentially hurt the company’s advertising business. Limiting data collection or retention would limit ad targeting. Less targeted ads then produce less revenue. The Platform Accountability and Transparency Act, or PATA act, is another proposal that could be damaging for Meta. This proposal would require social media companies to turn over data to vetted research institutions for study and recommendations. Under this proposal, companies who refuse would have their Section 230 protections taken away. Section 230 shields tech companies from liability for content on their platforms. Losing this protection could be devastating.

The silver lining here is in the fundamentals. Meta now trades at a valuation that may be enticing to many investors. The company’s financial house is fundamentally strong. Meta has no long-term debt to speak of, and cash and short-term investment hoard of $48 billion. Revenue growth was impressive in 2021. As shown below, the price-to-earnings ((P/E)) ratio is much lower than in recent years. Because of this, many investors may be tempted to buy the dip.

For my money, Meta needs to show it can thrive despite the changes in Apple’s policy and rectify its public relations struggles before it is a long-term buy. Daily active user growth and operating margin are metrics to watch in upcoming earning reports.

Another metaverse company that has disappointed Wall Street with its earnings report is Roblox. Topline sales for Q4 2021 came in at $569 million, an increase of 83% over the same period in 2020. However, the devil is in the details. First, while Q4 revenue growth is impressive at 83%, the growth rate has been steadily declining each quarter on a YOY basis since growth peaked in Q1 2021.

Roblox needs to prove that it can sustain growth as the pandemic wanes.

The stock has also been the victim of its own success in 2021. The valuation rose to unsustainable levels and still trades at an elevated price-to-sales ratio despite the recent drop, as shown below.

Unity Software (U) stock is down more than 30% YTD. Even a strong showing in Q4 only provided a temporary boost to the stock price, as shown below.

Unity’s platform allows users to create and run 2D and 3D content for gaming and other applications. Unity makes money in three ways. First, its Create Solutions line sells subscriptions to game developers. Next, the company makes money on a published game through advertising with its Operate Solutions segment based on a revenue-sharing model. Revenue in this segment is recognized on a “cost-per-install” or “cost-per-impression” basis. In 2021, the company earned 64% of its revenue through Operate Solutions. And finally, Unity earns money through strategic partnerships.

The company still has a long way to go to scale to GAAP profitability. The company posted a GAAP net loss of $533 million for 2021. Unity does report a non-GAAP operating loss of just $51 million for the year. It is estimated that this non-GAAP loss will narrow in 2022 while revenue will again see serious growth, to the tune of 34% – 36%.

Microsoft (MSFT) is obviously much more than a metaverse company, and its results have been awe-inspiring of late. On Jan. 25, 2022, the company released Q2 fiscal 2022 earnings and again showed why it is a long-term buy-and-hold core holding. Revenue reached $52 billion on an increase of 20% over the prior year. Operating income grew 24%, and diluted earnings-per-share rose 22%. Azure continued to be a leading growth driver as server products and cloud services revenue gained 29%.

Microsoft also continued to post terrific margins. As shown below, management has increased margin efficiency in recent periods. This is a testament to management’s effectiveness.

The announcement of the Activision Blizzard acquisition was the show stopper. This $69 billion deal will make Microsoft a powerhouse in the gaming industry. It is also part of its long-term strategy to push further into the metaverse. CEO Satya Nadella says the metaverse is “essentially about creating games.”

It remains to be seen whether regulatory hurdles will complicate the acquisition.

The metaverse is an exciting area for investors. Various companies are scrambling to gain a piece of it in different ways. These companies range from Big Tech giants like Meta and Microsoft to riskier growth stocks like Roblox. It remains to be seen just where the future of this technology will lead and which companies will come out on top. One thing is for sure, from Meta’s fall from grace to Microsoft’s blockbuster acquisition of Activision, the technology sector is rarely a dull place to be. At this time, and considering market conditions, Microsoft continues to be the only company above that warrants a buy rating for long-term investors. 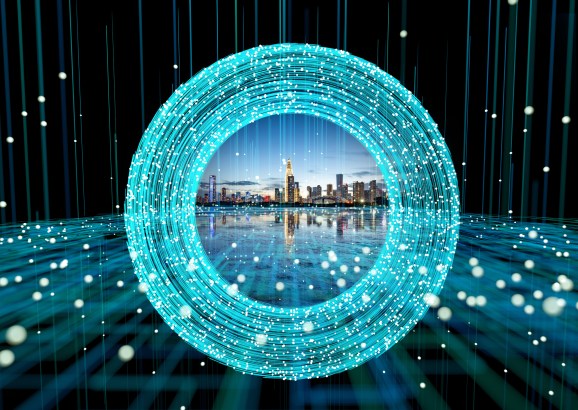