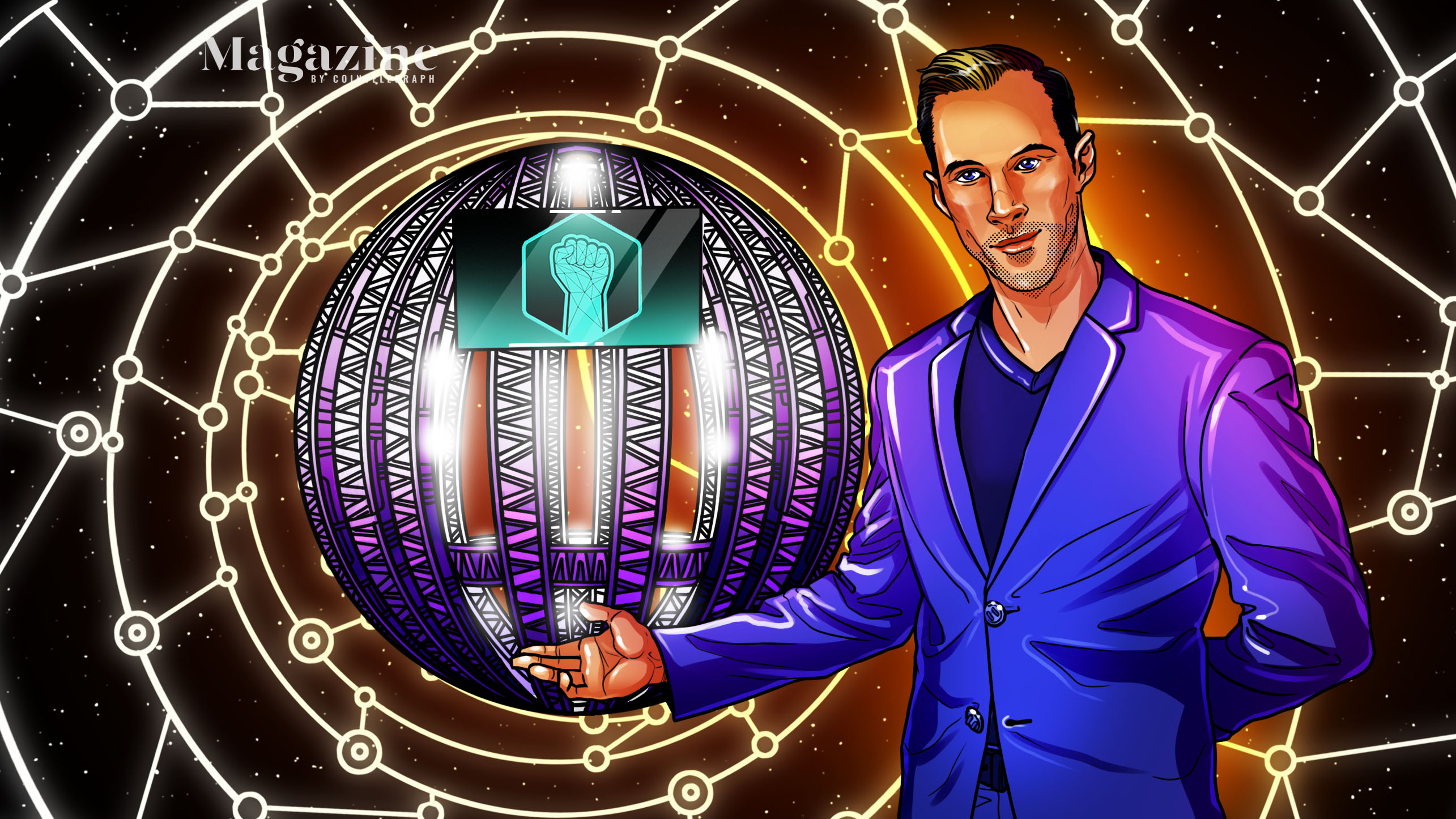 Robert Gryn is a serial entrepreneur who has built a high-tech Metaverse scanner which he hopes will act as a portal from our physical reality into the Metaverse.

It is no secret that the physical world is beginning to merge with the digital, and that blockchain is serving as the arbiter of reality in many of these nascent metaverses. Gryn, CEO of MetaHero, is doing his part to make that new reality as real as possible, creating high-definition 3D scans of people, objects and animals that you may soon encounter in games, virtual worlds and NFTs.

After spending a decade building European marketing company Codewise in Poland and even being featured on a Forbes list for the nation’s richest, Gryn left it all behind and moved to Dubai while building a solution with which he hopes to onboard the next billion people to the blockchain.

Gryn excitedly lists the potential applications of his full-body Metaverse scanners for things like digital fashion: “You’ll be able to scan yourself in your underpants, for example — it’d be very easy to try on not only digital fashion but real-world clothing,” he says.

But, this raises a serious concern. What if some privacy box is left unchecked or the system is hacked and I find my digital clone as the unwilling star of an AI-created adult video?

Gryn recognizes the issue, admitting that “if ultra-realistic scans got leaked and someone manipulated them to be in some sort of pornographic scene, that would potentially be the beginning of the end for us.” For that reason, he stresses the importance of secure file storage and the use of security measures such as watermarks.

Storing and managing high-resolution 3D scans of thousands of people is no easy technical feat, and it can also be a nightmare of privacy and copyright laws. The tech raises plenty of questions: Who can be given access to scans, how can they be used and how do royalties need to be set up? There are no easy answers.

“We are going to have to hire small armies of lawyers to cover all global jurisdictions to figure out what we can and cannot do in any given jurisdiction,” Gryn says, adding that the management of “terabytes of new data on a daily basis” is no small challenge but one he is confident he will overcome.

Rob Gryn has devised a high res portal into the Metaverse.

Originally from Poland, Gryn started out in an “eclectic kind of course” studying for a Master of Science in technology entrepreneurship at the University of Surrey in England from 2004 to 2008, where “each week, they would invite a local entrepreneur” to share their life story and answer questions about their business. One such presenter once told the class that of 100 people who want to start a business, only four actually do — and just one of them succeeds. Gryn recalls pondering how he could avoid the 96% fate of a “wantrepreneur” and strike out for real. After graduating, he continued with a master’s in marketing at the University of St. Andrews in Scotland.

He realized early on he was not cut out to be a corporate drone, during an internship at mobile network company Orange, where he received an employee number and access to the group’s intranet on the first day. Browsing the boring corporate intranet all day, “it was very obvious to me that I don’t belong there, and I don’t want to belong.” As he began his second day, nobody came along to give him work, and during lunch, “I decided just to bail and never ever allow myself to be part of this corporate type of structure,” he recalls with a laugh.

Stepping into the scanner feels otherworldly. Photo by Metahero

With the exception of his two-day stint there and another minor internship, Gryn’s first job was one of his own entrepreneurial makings as CEO of Codewise, a marketing company which he founded in Krakow, Poland in 2011. Using technology to help manage the brand marketing of various clients, the firm has ranked among Europe’s fastest-growing companies for three years in a row.

Each year, he remembers browsing the Polish edition of the Forbes magazine when they released an annual list of society’s wealthiest, where he would “always be looking for someone young that made it in a country that does quite the opposite of facilitating entrepreneurship.” Later, undue bureaucracy and a post-communist mentality which he says is prevalent in Eastern Europe influenced his decision to relocate to Dubai which he considers more business-friendly.

He made it, building the firm into “a 250-person IT company in the advertising technology space.” At age 31 in 2017, he was featured as the youngest self-made man on the Forbes list of richest Poles with a fortune estimated at about $150 million.

But Gryn was not quite happy, describing that he felt as if he were living “in like a golden cage that I had built and the door was open.” He was suffering from burnout by 2018, and “I wanted the company to be out of my life,” he recounts.

After moving on from the company he had spent a decade building, Gryn saw crypto as the rabbit hole most worthy of his newfound time and money.

“I had always been crypto-curious, but to go fully down the rabbit hole you need quite a bit of headspace to wrap your head around it.”

He came to an interesting conclusion. “Crypto is probably the most important technology of modern mankind that will level the playing field in every single possible imaginable aspect — namely giving people financial freedom,” he proclaimed.

As he continued exploring the industry, he found most crypto projects to be “very crypto-centric,” and difficult for those outside of the industry to comprehend in any practical way. As he saw it, it didn’t all need to be related to DeFi or even to money. Seeing the idea of cryptocurrency as still unapproachable to most, Gryn felt strongly that not enough was being done to “bring in the next billion people to crypto.” A task he reasoned would be best accomplished through the gaming and entertainment sector.

For Gryn, mass adoption of “crypto” is about building “a more equitable future” for the next generation, he explains — convincingly enough, considering he brings up his newborn son as an inspiration for helping create a better tomorrow, something he says can pretty much only be done with technology. Brainstorming on a way to combine his capital, network and background as a gamer, he came to the idea of MetaHero — a project allowing anyone to create a 3D avatar of themselves in the Metaverse.

Unlike many entrepreneurs who brag of the endless hustle, Gryn describes himself as possessing a natural laziness inherent to all humans. At Codewise, he used unconventional business methods such as renting out office spaces which he could not reasonably afford in order to force himself to keep the business growing. One time, after signing the lease for a new space, he looked at the company balance sheets and thought “holy crap, if we don’t double our revenue and profit, there’s no way we can pay for this office,” he tells me.

Another method for success is one he calls “conference-driven development,” in which “you book a very, very expensive conference or trade show a few months in the future — and then you promise to deliver X, Y and Z and even if that seems impossible, you make it possible.” This was apparently the case for Dubai’s Future Blockchain Summit, where, with me bearing witness, Gryn launched his scanner to great fanfare and amazement after only months of development.

“I figured out quite early that if I put myself in the position where I have no choice but to succeed, then I will succeed,” he says with infectious confidence.

He called up his friend “the Polish Elon Musk” Mariusz Krol, CEO of 3D printing and scanning company Wolf Digital World, and suggested a partnership through which to scan our reality into the Metaverse. Krol’s company has been “working on 3D photogrammetric technology for eight years,” and the entrepreneurs set out to build a scanner made of 200 Sony cameras, 1,500 meters of wiring and 20 computer units. When the team demonstrated their scanners, which are each capable of 150,000 scans per year to Sony, they were amazed, as “they didn’t even know that something like that could be done with their own equipment,” Gryn recalls.

Here’s how it works: The scanned item, whether a human, cow or object, is placed in the center of the scanner. The lights shine from every direction to evenly illuminate every surface while the hundreds of cameras capture a simultaneous image from all angles. These are then spliced together by high-powered imaging software in order to create a realistic 3D image that can be inserted into any digital space, whether social media, a video game or the metaverse. It might be a perfect way for a performer to create a lifelike avatar in which to perform at an Animal Concert in the Metaverse, for example.

“We’re going to build the largest database of 3D scanned people and objects in the world,” Gryn explains, regarding his vision. He sees this as an important step for the building of the Metaverse, adding that creating a hyper-realistic “in-game character that resembles a human, with blemishes and everything” is a difficult and expensive task. “Once you build a database of hundreds of thousands of scan items and people, the use-cases for that are so limitless that sometimes it boggles your mind,” he says excitedly.

As far as he knows, no comparable 3D scanner exists unless “maybe there’s a more advanced one somewhere in a top-secret basement in Hollywood.” Especially notable, according to him, is the scanner’s speed which means “we’re able to do scans so quickly that we’re able to capture practically any animal and import it into the Metaverse — say, your dog”, Gryn explains.

Metahero scanners are meant eventually to be available around the world, with scans payable in Hero tokens which were launched in July. The tokens exist on BNB Chain in large part due to high fees on the Ethereum network. While some have gone to investors, a portion is earmarked to provide incentives for people of various walks of life to be scanned as bonuses, in addition to the potential royalties they might earn from the use of their images.

“1% of the total supply or hero token is dedicated to paying the first 100,000 people $1,000 equivalent in our token to get scans — you get paid to get scanned,” Gryn boasts.

Though Gryn envisions a future where mass adoption of the Metaverse could see people earning their “livelihoods just based on their 3D avatars that they can monetize in various ways,” he admits that the future is not quite yet not when it comes to realistic Metaverse avatars.

This is because today’s Metaverse applications do not support the high-definition available through Wolf Digital World’s scanner. For this reason, “we’re building technology to allow you to scale down quality because 16k is not going to be supported for the next maybe 5 or 10 years,” he says.

“10 years down the road, the Metaverse will likely be almost indistinguishable from our everyday reality — something that you log on to and have your own space there, your NFTs, your artwork, your apartment.”